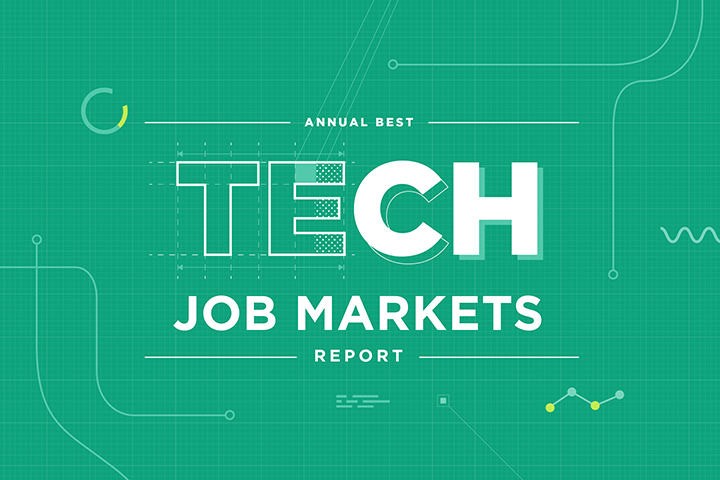 People want to work in high tech, and it’s clear why. Tech salaries tend to be about $60,000 more per year than the national average wage, according to a 2018 report from CompTIA, a leading tech trade organization. Tech companies have also built a reputation for offering Cadillac-level benefits, outrageous perks, work-from-home flexibility, and (of course) the promise of stock options with 10x returns.

Since technology has permeated nearly every industry today—even real estate agents are working with artificial intelligence—there’s more opportunity than ever to snag a great gig in tech. Recent ZipRecruiter data has also revealed a rise in mid-skill, new collar tech jobs that don’t require a college degree, making it possible for those with some additional technical training to dodge the albatross of student loan debt and jump headlong into a lucrative tech career.

While geography once posed a major barrier to entry for even highly-skilled tech job seekers, these types of jobs are now offered in nearly every state and in cities you might not expect.

Since we’re a tech company on the leading edge of AI and cloud computing ourselves, it’s only right that we would leverage our big data to find the best tech job markets for 2018. We started by looking at our proprietary Opportunity Index, which calculates the ratio of available jobs to job seekers in the tech industry by metropolitan area. Then we factored in other big data and government stats to account for cost of living, transit, walkability, commute time, and even a health grade.

We linked up with our friends at Payscale.com to get a real-time report on the median tech salary in each of the metros we found, as the final factor in building our list.

Number of Paychecks Needed for a Down Payment: 21

The Twin Cities shouldn’t be thought of as an icy Midwestern outpost dominated by agriculture and manufacturing jobs. In fact, the metro area ranks 12th in the nation for tech workforce participation, according to the latest CompTIA data, with nearly 10% of the all workers in the Twin Cities employed in the tech industry. Minneapolis-St. Paul boasts a diverse array of tech jobs ranging from hot startups to cutting-edge jobs in biotech. It’s also an incredibly livable city, ranking at or above the 80th percentile in our index for health, affordability, and transit.

Number of Paychecks for a Down Payment: 40

The D.C. metro area is one of the few high-density, large population tech markets to rank on our list, and in second place no less. While big cities typically rank low on opportunity due to greater competition and overall affordability, D.C. bucks both of those trends. The median household income of over $96,000 helps to soften the blow of the high cost of living, and with nearly one tech job available for every job seeker, D.C. also boasts the highest degree of opportunity of all the tech towns on our list.

Number of Paychecks for a Down Payment: 17

The epicenter of Upstate New York’s “Tech Valley,” Albany is a burgeoning tech hub fed by tech incubators at the Rensselaer Polytechnic Institute and the State University of New York’s College of Nanoscale Science and Engineering. According to a ZipRecruiter study performed last year, Albany was ranked the 4th fastest-growing tech town in the U.S., with 161% year-over-year growth in tech jobs.

Number of Paychecks for a Down Payment: 15

Dubbed the “Silicon Prairie,” Omaha’s well-established banking and finance industry is leading the charge in fintech innovation. It’s no wonder considering that Omaha is home to both Warren Buffett’s Berkshire Hathaway and the First National Bank of Omaha—the largest privately-held bank in the U.S. with over $17 billion in assets. This article from the Silicon Prairie News pulls back the husk on Omaha’s startup scene.

Number of Paychecks for a Down Payment: 12

Iowa’s tech ecosystem began to form several years ago, when Facebook, Google, Microsoft, and Apple established massive data centers in and around Des Moines. At the time, the local government was criticized for incentivizing these developments, since they create short-term construction jobs but few long-term, well-paying tech jobs. But based on our analysis, there’s still no shortage of tech jobs to be had in Des Moines’ thriving startup scene.

Number of Paychecks for a Down Payment: 12

With nearly $700 million flowing in from investors, 2017 was a record year for the Pittsburgh tech scene. AlphaLab is Pittsburgh’s leading tech accelerator, having helped nearly 150 startups off the ground since its founding in 2008. According to our analysis, they’re still doing a pretty good job considering there’s currently one tech job for every two applicants on the market.

Number of Paychecks for a Down Payment: 13

With over 300% year-over-year growth in tech jobs in 2017, we ranked Huntsville the fastest-growing tech town in the U.S. last year. Nicknamed the “Rocket City,” in part because it is home to NASA’s Marshall Space Flight Center, Huntsville mostly has tech jobs in aerospace and defense. Considering the high salaries these jobs fetch and the low cost of living, Huntsville’s definitely earned its spot on our list.

Number of Paychecks for a Down Payment: 10

The emerging tech scene in St. Louis is an excellent example of how community leaders and local government can band together to stay current in the rapidly changing economy. Recognizing the need to bring more tech jobs to St. Louis, entrepreneurs and city leadership have created several successful tech incubators and founded Arch Grants, which has given more than $6 million to nearly 120 startups, creating over a thousand jobs as a result.

Number of Paychecks for a Down Payment: 70

Yes, people are leaving the Bay Area to seek a lower cost of living. And yes, the primary reason why San Francisco ranks so low on our list is due to its poor affordability factor. Still, San Francisco’s great quality of life and high tech job opportunity make it an undeniably great tech town. The median tech salary here is also the highest on the list, which somewhat offsets the absurdly high housing costs.

Number of Paychecks for a Down Payment: 31

If anything qualifies a place as a bona fide tech town, it’s Google moving in. Google opened their Boulder campus at the beginning of the year and has plans to expand through 2019. But it’s not just Google that’s creating tech jobs in the Denver area. Startup networking site, AngelList, has over 1,800 Denver-based startups and nearly 5,500 investors listed on their site. Despite its status as one of the hottest tech scenes in the world, Denver’s high cost of living dragged it down to the bottom slot. But is still ranks 10th out of the 383 metro areas we studied.

Methodology: We applied our Best Job Market Index to all 383 Metropolitan Statistical Areas (MSAs) in the U.S. and ranked them by their index score. MSAs with fewer than 450,000 residents were excluded from this study to control for volatility in the index. Median salary data was provided by Payscale.com and home price data was provided by Zillow.com. The number of paychecks required to save for a down payment is based on bi-weekly net pay assuming a 20% tax rate and a 20% down payment.