Although employment in the warehousing and storage subsector has continued to outpace growth in nearly every other industry, you can’t just ask Alexa for a warehouse job and expect one to arrive on your doorstep. In fact, warehouse jobs were the most competitive among job seekers on ZipRecruiter in all of 2018.

It’s with good reason that these jobs have been sought after for so long. A relatively low barrier to entry, coupled with an average hourly wage of $14, and the near ubiquity of fulfillment centers across the U.S. have made warehouse jobs the go-to for blue-collar workers for decades.

Unfortunately, many of those vying for these positions today may not be aware of the tectonic shift in skills required to be a successful candidate. Advances in automation and drone technology have clearly changed the character of warehouse work: according to ZipRecruiter data, it now has more to do with systems management that it does moving boxes.

A Blurred Line Between Manual Labor and Management

Judging from our analysis of thousands of warehouse jobs posted to ZipRecruiter in January of 2018 and 2019, the humans haven’t been totally replaced in warehouses quite yet. Overall, jobs in warehousing and storage posted on the ZipRecruiter marketplace increased by 85% in 2018 compared to the year prior.

Management level positions increased nearly twice as much, however. Over the same period jobs in warehousing and storage with the word “manager” in the title grew 164%—a trend that is evident from the shifting skills requirements we’ve observed in ZipRecruiter job postings. 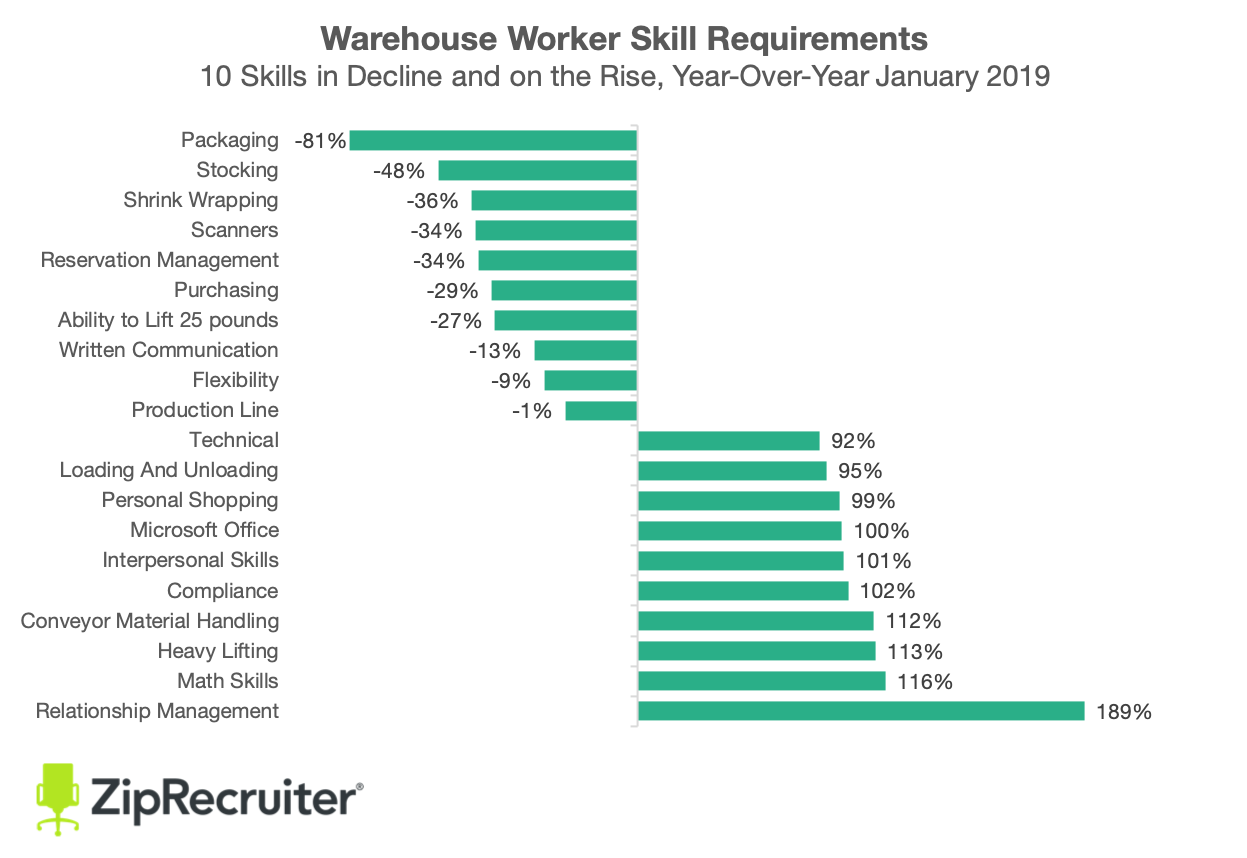 We compared thousands of job openings posted to ZipRecruiter in January 2018 to January of this year to see how the skills required by employers have changed. The two skills that saw the greatest decline happened to be two of the most fundamental skills traditionally associated with warehouse work: packaging (-81%) and stocking (-48%).

The skills that are on the rise sound more like they for an entry-level business services role, albeit one that requires “heavy lifting.” Relationship management and math skills were the top two fastest-growing skills requirements that employers in the warehousing industry mentioned in job postings this January.

In addition to heavy lifting, there are still some usual suspects in the list of top skills—loading and unloading increased 95% year over year, for instance. But even this skill could have greater currency in the age of automation.

In a study on the job creation potential of autonomous trucks performed by Uber’s Advanced Technologies Group last year, the authors identified the need for the human touch at distinct moments of an otherwise automated logistics process:

“The biggest technical hurdles for self-driving trucks are driving on tight and crowded city streets, backing into complex loading docks, and navigating through busy facilities. At each of the local haul pick ups and drop offs, there will need to be loading and unloading. These maneuvers require skills that will be hard for self-driving trucks to match for a long time.”

But technology still has a ways to go before we can define the relationship between man and machine. Until then, it’s clear that existing technology has called for more employees with management skills to keep these systems running at an optimal level. This includes not only technical acumen but also the administrative and interpersonal skills one would expect any good manager to have.