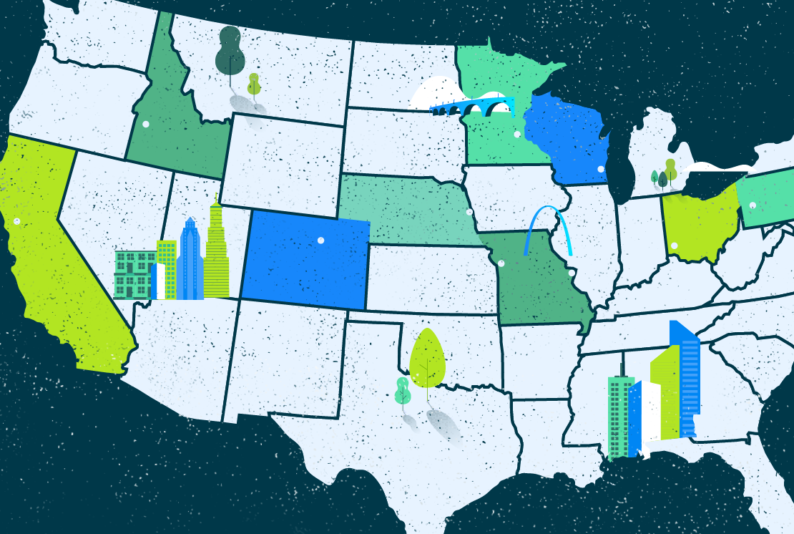 More Americans than ever have a four-year college degree, and as overall educational attainment has continued to rise, competition for high-skill jobs has increased as well. Even in today’s labor market, which is marked by extremely low unemployment and steady job growth, finding a good job that balances affordability with a high quality of life can be challenging.

To determine the best job markets for recent college graduates, we analyzed internal ZipRecruiter and public data. We started by creating an index of the most significant factors affecting recent college grads, then ranked the top markets based on our findings.

The index includes the ZipRecruiter Opportunity Score (the ratio of jobs to job seekers) for metropolitan areas in the U.S. with a minimum population of 700,000 residents*, plus rankings for commute time, walkability, affordability, and unemployment rates. We also worked with Payscale.com to determine the median salary in each of these metros for recent college graduates.

This year’s rankings were dominated by mid-sized metros across the Midwest. While this is due largely to the affordability factor, it’s also because these regions have extraordinarily low unemployment and high rates of opportunity for well-paying jobs.

Home to titans of industry, a charming turn of the century downtown district, and a rocking music scene, Omaha is anything but a fly-over city. It ranks first on our list for recent college graduates because it strikes the rare balance of affordability, high job opportunity, and a great quality of life. Considering Berkshire Hathaway and Omaha Mutual are both headquartered here, grads with finance and accounting degrees needn’t limit themselves to jobs on Wall St. There are also more jobs than applicants in the healthcare, construction, and energy industries, to name a few.

The Twin Cities ranked just below Omaha for one major reason: affordability. The median salary for recent college grads here is near the highest on our list, with only Santa Rosa and Denver grads earning slightly more. However, the median rent is 20% lower in the Twin Cities than either of those cities, leaving more disposable income to take in a Twins game or pay off those student loans more quickly.

St. Louis is routinely ranked one of the best sports cities in the country. Because of the many major sports franchises based here, jobs in the sports and recreation industry are plentiful. But this town isn’t just for jocks. St. Louis also has a serious cool factor, boasting a thriving music and arts scene.

Pittsburgh has the highest unemployment rate of the cities on our list (although 4.7% is still pretty low). And two major factors might bring Pittsburgh unemployment way down in the near future. The Trump administration’s recently imposed tariffs on imported steel could be a boon to Pittsburgh’s struggling steel and manufacturing industries. Plus, the Steel City is on Amazon’s short list for the location of its second HQ. If chosen, Amazon could bring upwards of 50,000 jobs to Pittsburgh.

College graduates with degrees in the humanities should take a close look at Milwaukee. It’s known as the city of festivals and there are currently three jobs for every applicant in the arts and entertainment industry. Mechanical engineering grads will also thrive here, as Milwaukee is home to Harley-Davidson and the Fortune 1000 engine manufacturer, Briggs & Stratton.

Kansas City ranks #31 on Forbes’ list of best places for business and careers. Clean energy jobs are booming across the Midwest, and many of them are located here. In 2017 the city set a number of ambitious clean energy goals, including powering 100% of city operations with renewable energy within three years. It’s no wonder there are currently three jobs for every applicant in the energy and environment industry.

The only West Coast city to make our list, Santa Rosa balances its high cost of living with high earnings. It is the largest city between San Francisco and Portland and the county seat of Sonoma County. While local government and healthcare institutions (such as Kaiser) are the area’s largest employers, Santa Rosa is only about an hour away from the thriving tech economy of San Francisco.

Boise has become a mainstay of many “best of” lists, recently ranking number one on Forbes’ list of America’s fastest growing cities. Much of its growth is due to the many tech startups cropping up in the Boise Valley. Hewlett Packard and Microsoft are major employers in the area, and there are many new kids on the block looking for top tech talent.

Denver is now well-established as one of the next Silicon Valleys. Once Google moved in, the wave of tech startups began to swell, and it shows no sign of breaking soon. Denver’s median rent is the highest on our list, and housing prices are soaring thanks to the tech boom, but the unemployment rate is exceptionally low. With so much entrepreneurship happening in Denver, recent college graduates might have trouble choosing between job offers.

Cincinnati is now Ohio’s largest economy, thanks primarily to the presence of mega-companies like Procter and Gamble, Kroger, and Macy’s, that are all headquartered there. General Electric opened its new global operations center on the banks of the Ohio River in 2016 and continues to add jobs. There are many opportunities to start a career in the Queen City at a company with a marquee brand name.

College graduates across the country will be asked the same question by family and friends this summer: “What are you going to do now?” Unfortunately, we can’t answer that question for them. But this analysis takes the guesswork out of where recent college grads ought to look for the best opportunities to kick off their career.

*Metropolitan Statistical Areas (MSAs) with fewer than 700,000 residents were excluded from this study to control for volatility in the index. For example, smaller MSAs tend to have either very high or very low walkability, depending on the density of the area.