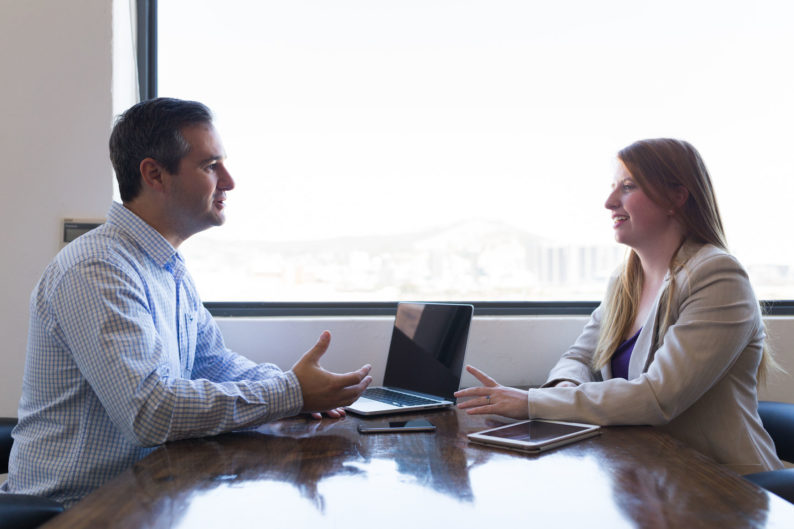 During the Great Recession and the ensuing years of economic turmoil, employers had all the leverage in hiring negotiations. Most job seekers had two choices: take it or leave it.

But the current labor market landscape is very different. We have now experienced 98 consecutive months of job gains and, at 3.7%, unemployment is the lowest it has been in nearly 50 years. With job openings exceeding unemployed job seekers by more than one million, job seekers should now find themselves in a much stronger bargaining position.

10 years after the collapse of Lehman Brothers in September 2008, however, a new survey of 50,000 job seekers by leading online employment marketplace ZipRecruiter® (www.ziprecruiter.com) reveals the Great Recession left lingering scars for America’s workforce.  While job seekers are generally optimistic about the future, many feel pressure to accept the first job offer they receive, lack the confidence to negotiate for higher pay, and are anxious about the prospect of job losses and recessions to come.

Typically when unemployment is this low, only a small share of job seekers are unemployed and a larger share is currently working, which means that they can take their time, apply to multiple jobs, and be picky. In a word, they have leverage. 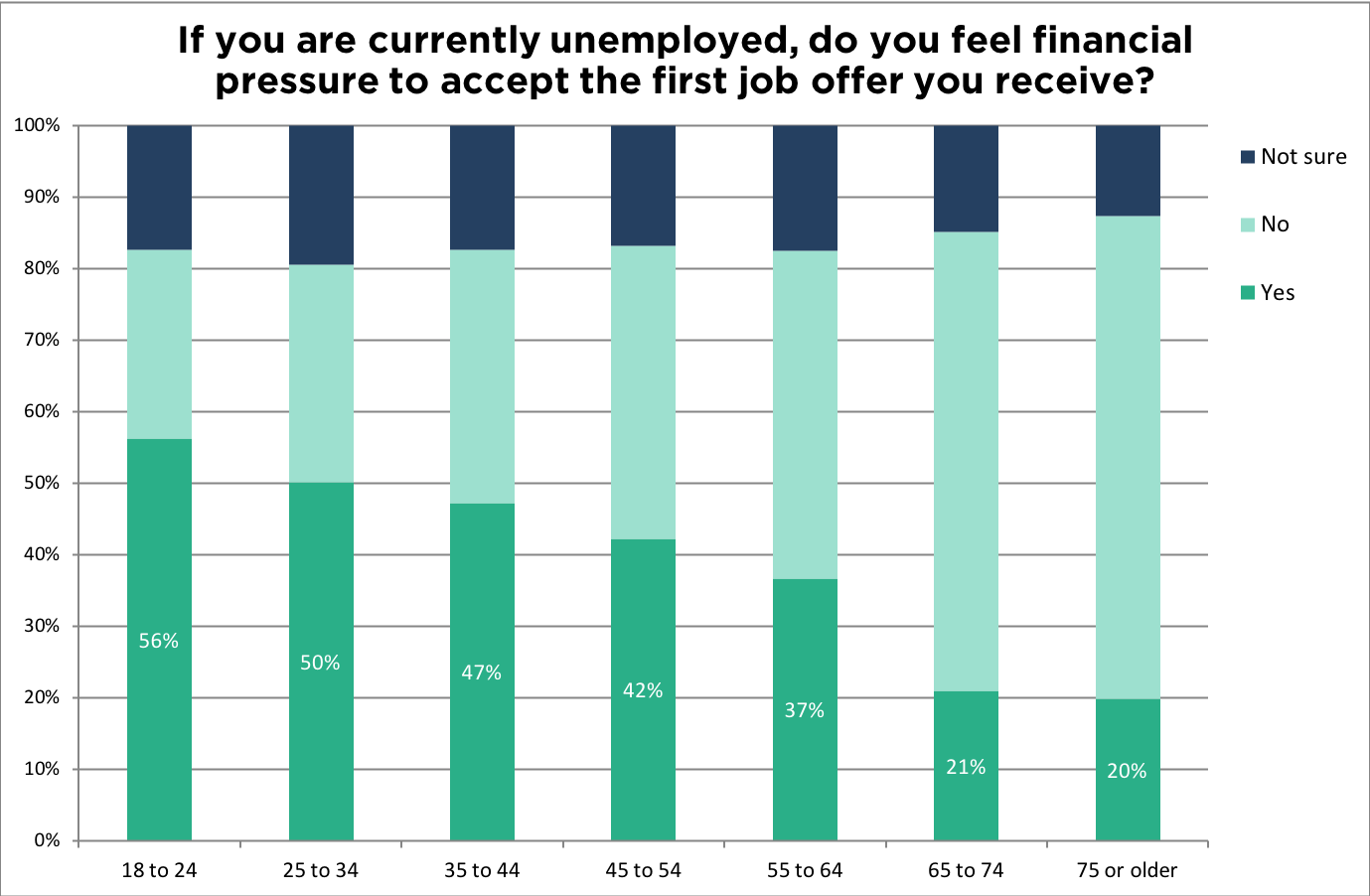 However, 44% of the 50,000 job seekers we surveyed are not currently employed. And 46% of those who are working said they are unable to make ends meet on their current salaries. Among job seekers who are not working, 4 in 10 said they feel financial pressure to accept the first job offer they receive. That figure rises to almost 6 in 10 among younger Americans aged 18 to 24.

2. Large Numbers of Job Seekers of All Ages Are Unhappy With Pay, But Still Not Asking for More

Not negotiating your salary can have huge implications for lifetime earnings. One recent study of newly hired employees in various industries found that those who choose to negotiate are able to increase their starting salaries by an average of $5,000. Assuming a 5% pay increase each year over a 45-year career, negotiating a starting salary of $45,000 rather than $40,000 translates into an additional lifetime earnings of over $750K. 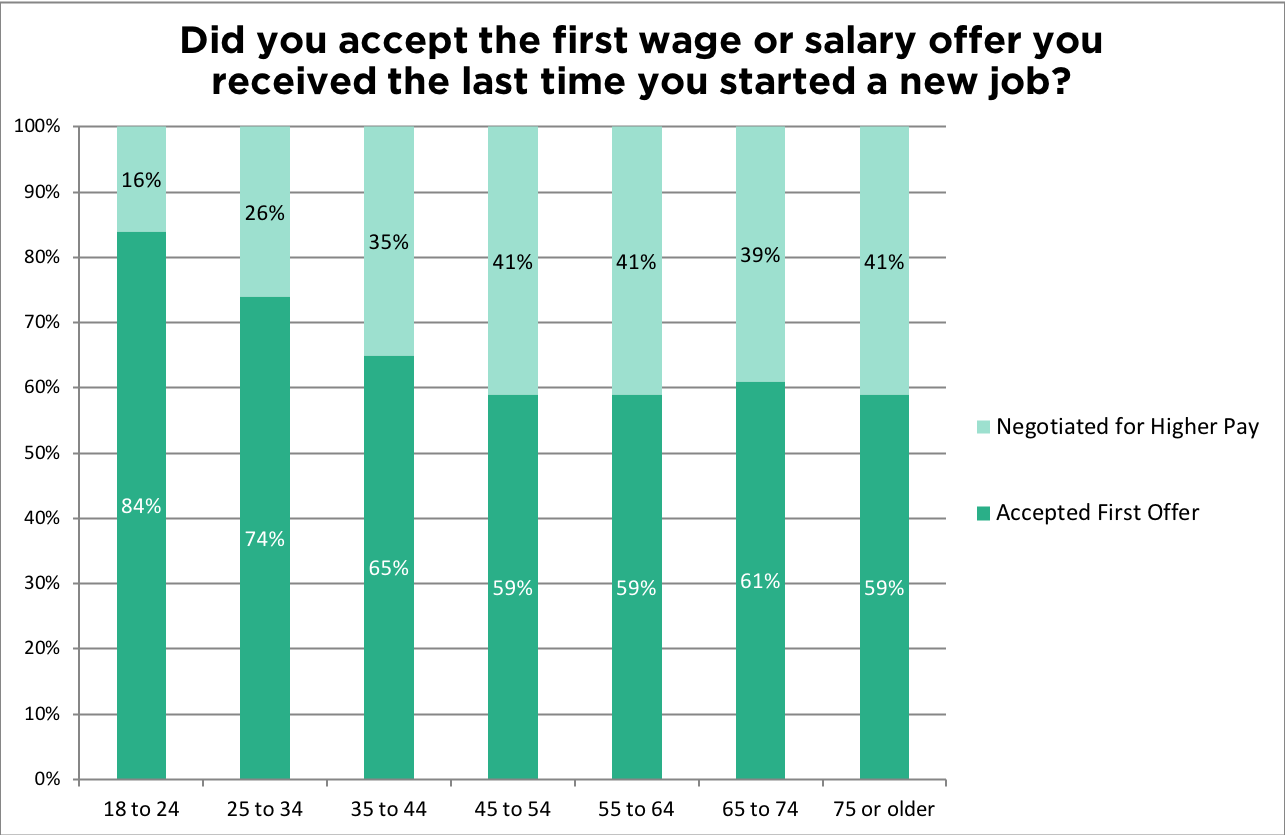 3. Women Are Even Less Likely to Ask for a Higher Salary

There were significant differences in self-reported negotiating behavior between men and women. Only 31% of women negotiated for higher pay the last time they were hired, compared with 40% of men, and only 39% of women turned down job offers in the past, compared with 47% of men. 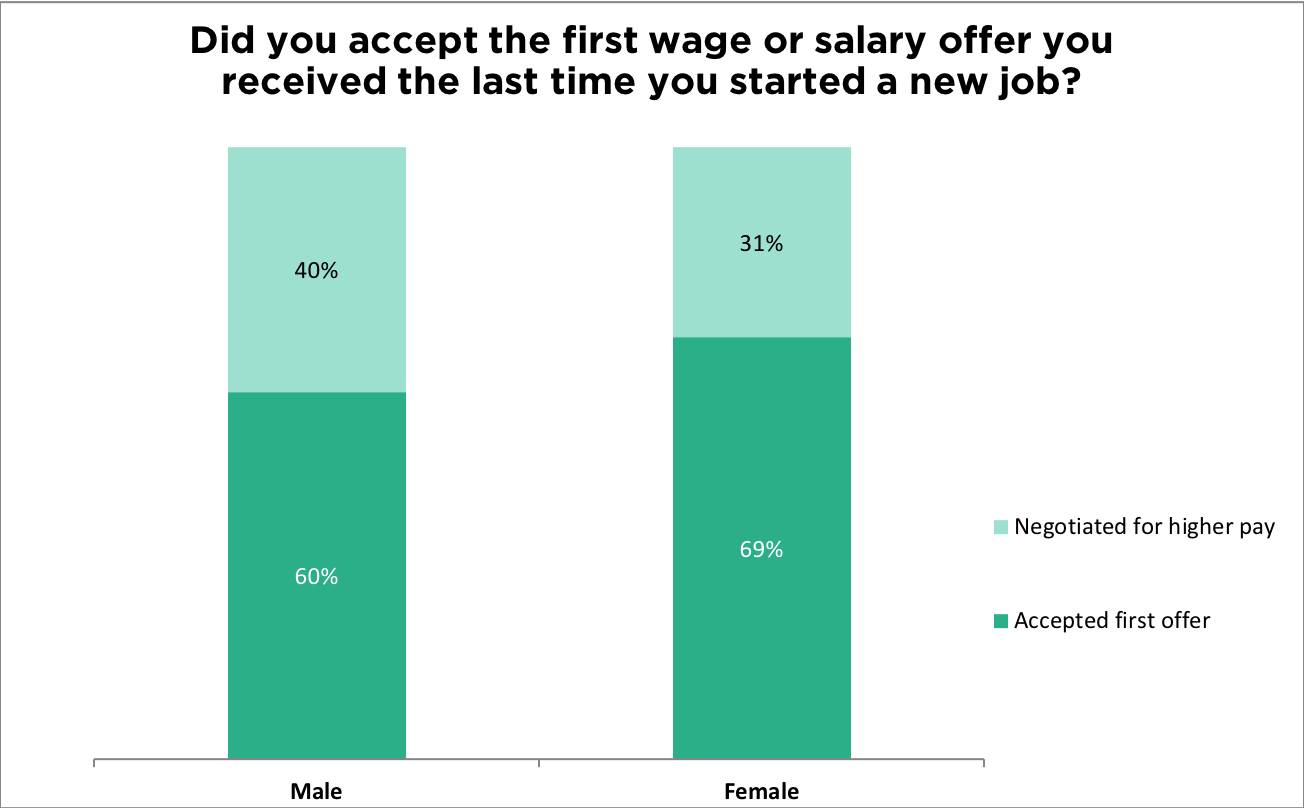 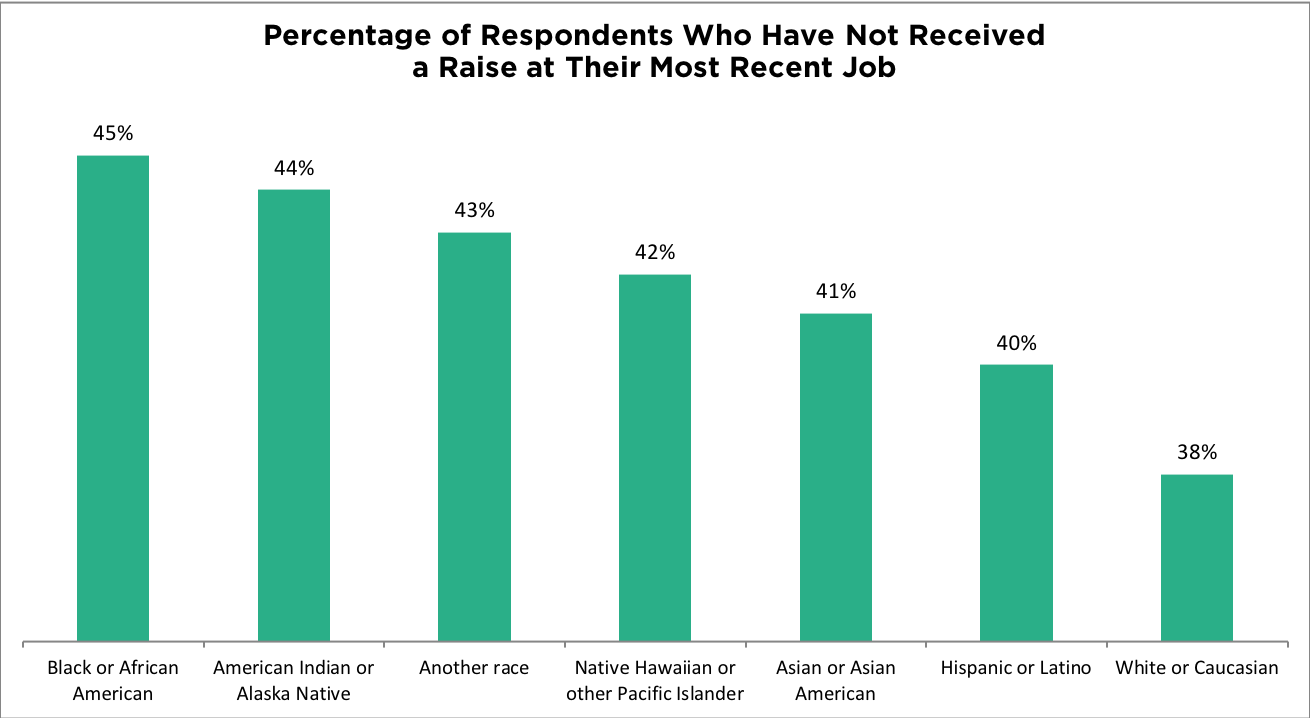 Despite the tight labor market, many job seekers are worried about their future prospects and fear losing their jobs or going through another recession. When we asked job seekers what they are most afraid of when they think about the future, 43% said losing their job or experiencing an economic downturn.

Minorities and younger Americans appear to have paid a higher price for living through the Great Recession. African Americans and Hispanics reported a greater fear of job loss than their white counterparts, regardless of their employment status and education levels. 52% of African Americans and 50% of Hispanics rated losing their job or an economic downturn as their greatest fear, compared with just 37% of whites. 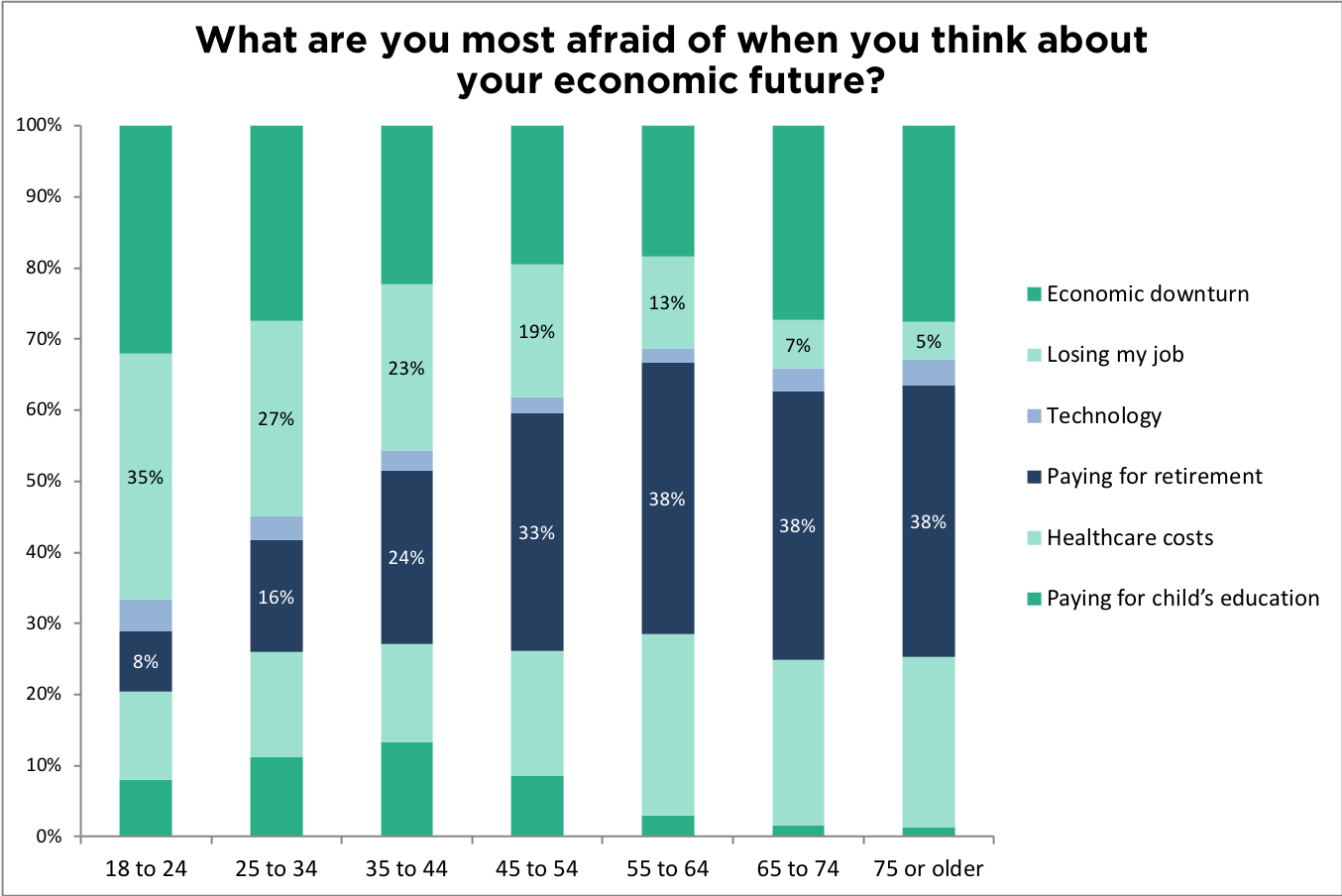 Despite lingering fears, there is a great deal of optimism among job seekers. When asked what they are most excited about in the future, 39% said progressing in their careers and 26% said making a higher salary. 51% agreed that there were more good job opportunities available today than in the past.

Job seekers are demonstrating their optimism about the availability of more attractive opportunities by quitting their jobs at the highest rate recorded since the U.S. Department of Labor began collecting the data in late 2000. A full 39% of employed job seekers in our survey said they plan to quit their current job within the next 12 months.

6. Why Job Mobility and Geographic Mobility are Declining

Although the quit rate is the highest it has been since 2000, Americans are still moving and changing jobs far less frequently than they did in previous decades. Our survey provides insight into why job and geographic mobility are declining.

Job seekers told ZipRecruiter they would require a 33% pay increase to change jobs, and a 53% pay increase to accept a job in another city or state. That suggests many are choosing to leave money on the table in order to stay put. 53% of job seekers said it would be difficult or very difficult for them to move to another state.

The reasons for their reluctance were somewhat surprising. Rather than emphasizing barriers to moving, such as housing-related issues and occupational licenses, 69% of survey participants who said it would be difficult to move cited wanting to continue living close to family, a spouse or partner’s job, or friends as the reason. Only 12% mentioned housing as an impediment, 2% mentioned non-transferable licenses or accreditations, and 2% mentioned non-transferrable benefits. 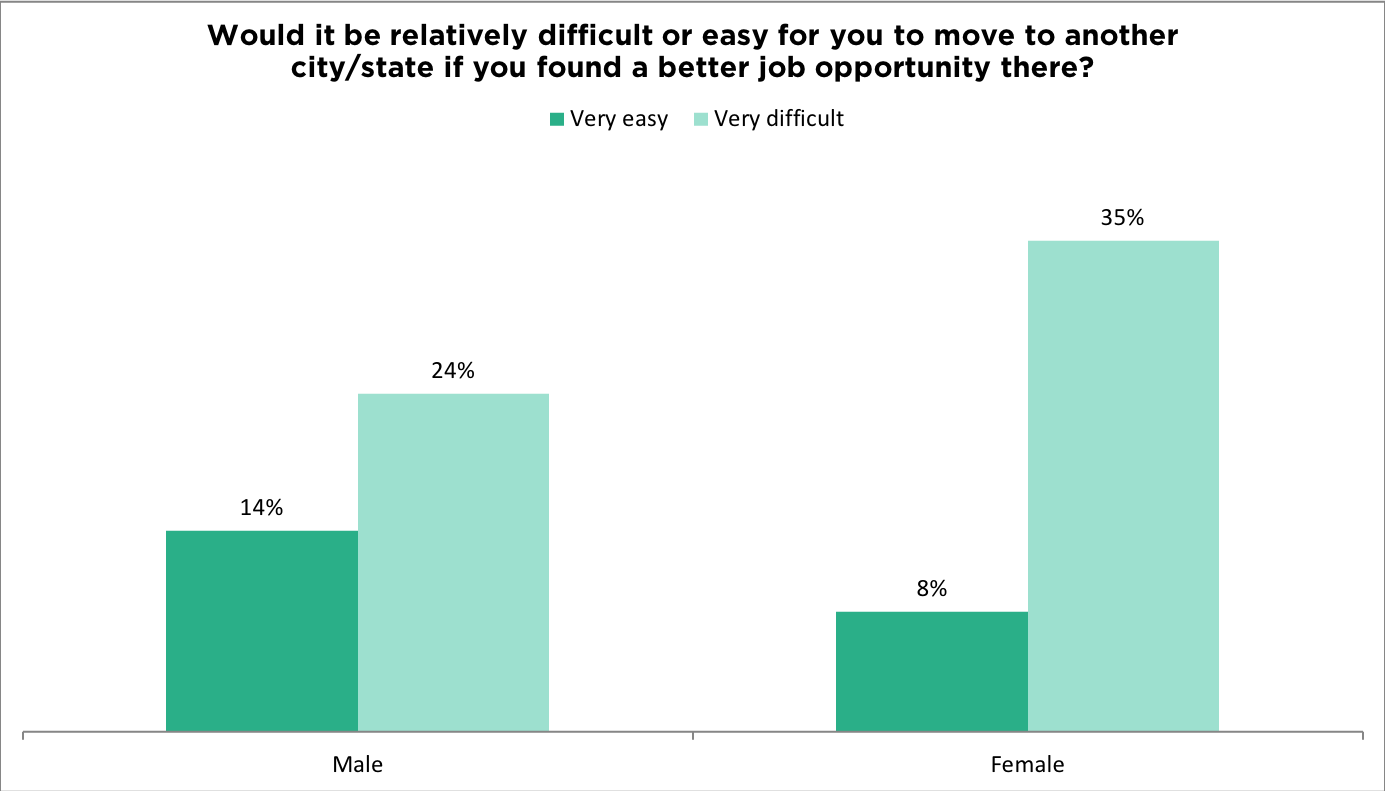 7. How Employers Can Compete for Talent in the Tight Labor Market

Only about one-third of currently employed job seekers say they are satisfied or very satisfied with their current compensation package. That suggests that employers looking to expand hiring and compete for quality talent have an opportunity to compete on pay. The composition of compensation packages differs widely across employed job seekers, but the elements most strongly associated with compensation satisfaction are equity, bonus pay, health insurance, paid sick leave, and retirement savings contributions. 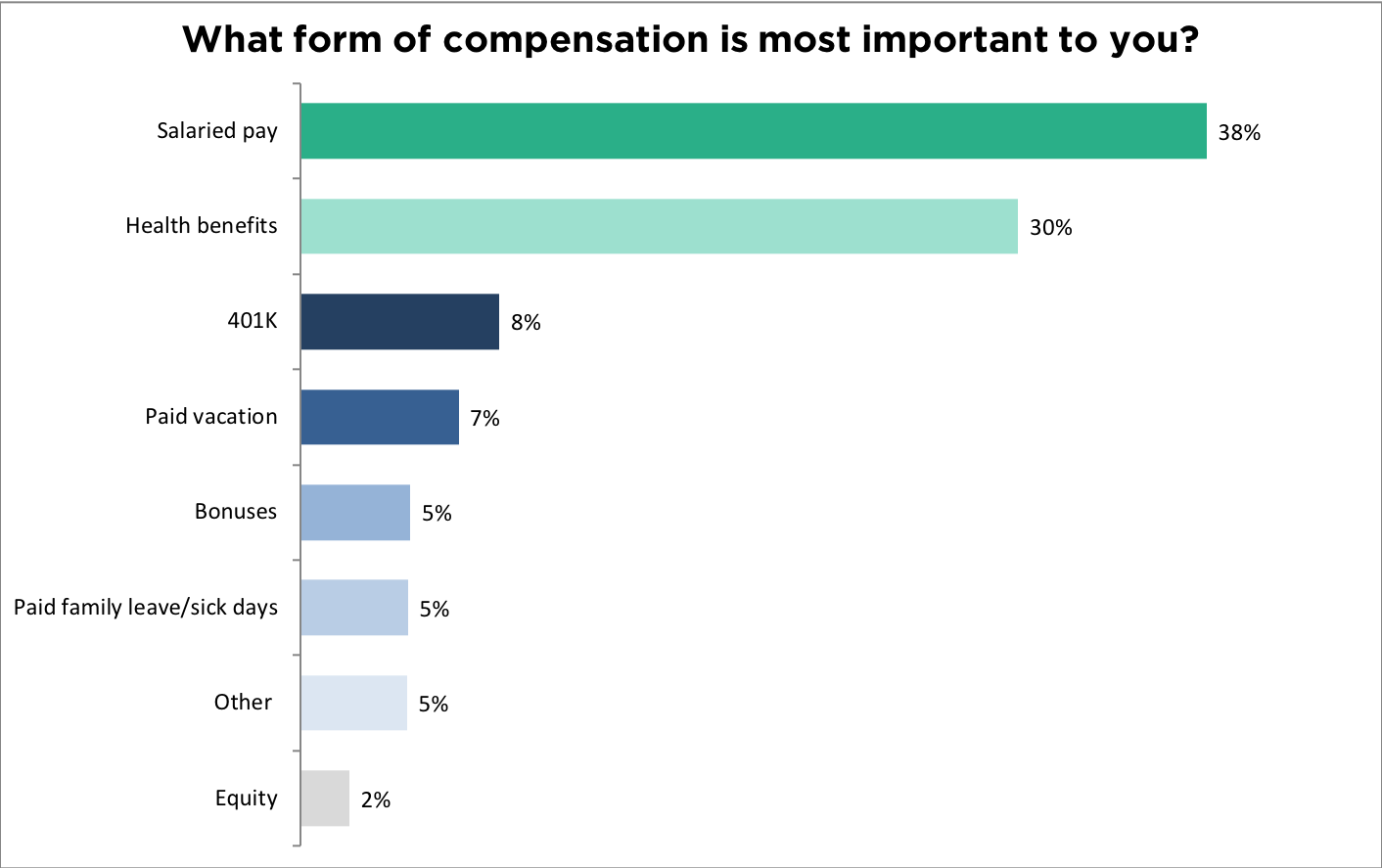 When asked directly about which form of compensation matters most to them, 38% rank topline pay as most important, 30% said health benefits, and 8% said retirement benefits, such as 401K contributions.

33% of respondents said that pay was the most important factor in their decision to look for a new job, while 40% said it was a top factor but not the most important. The main reason job seekers gave for feeling dissatisfied with their jobs was poor management (cited by 57%) followed by no room for growth (57%) and low pay (53%). While improving pay can certainly improve an employer’s recruitment and retention, cleaning up management practices and providing employees with room for career growth may be even more important.

8. Low Wages and a Lack of Mutual Understanding

The results of our job seeker survey help to explain why wage growth has been relatively slow, despite the tight job market, and why employers have been slow to raise wages, despite reporting difficulty finding and retaining quality candidates.

In our most recent employer survey, 82% of employers said that finding quality candidates is their biggest business challenge and 70% said they were finding it more difficult to hire this year than last. Still, only 30% said they have sought to address that problem through increasing pay, and even fewer (just 7%) said they have done so by increasing benefits.

Employers may feel little pressure to raise pay because job seekers so often accept their opening salary offers and because workers refrain from asking for pay increases, even when they are dissatisfied with their compensation and struggle to make ends meet.

59% of respondents who say they have turned down job offers in the past cite insufficient pay as the reason they did so. Yet a minority of these respondents—about 42%—say that they have tried to negotiate for higher pay. In other words, many job seekers still appear to treat employers’ salary offers as take-it-or-leave-it propositions, rather than as opening offers in a negotiation.

The result is often that workers feel dissatisfied with their compensation packages and quit their jobs, even though more than half say they would stay for higher pay. Employers may not realize the degree of dissatisfaction about pay among their workers until it is too late.

Although many employees and job seekers are failing to use their newfound leverage to ask for higher starting salaries or raises, workers are sending a message to employers by quitting their jobs in record numbers. Many are leaving their jobs, pushed by dissatisfaction over pay, high debt-to-earnings ratios, and difficulty making ends meet. Instead, they are seeking other jobs, pulled by the promise of better outside opportunities.

The ZipRecruiter Job Seeker Survey provides a roadmap for employers who are facing mounting turnover costs and struggling to win the war for talent. Most workers would stay in their current jobs for more pay—even those who express dissatisfaction with management and advancement opportunities. And there are large numbers of job seekers who are not currently employed but interested in working under the right conditions. More generous compensation—particularly topline pay—could be the key to employers broadening their talent pool, pulling new workers off the sidelines, and retaining their most valuable employees by improving job satisfaction.

Methodology: ZipRecruiter surveyed 50,184 active job seekers in the United States in September and October of 2018. Active job seekers are defined as logged in registered users who visited ZipRecruiter’s job search site or actively used the ZipRecruiter job search app during that time period. Survey participants ranged in age from 18 to over 75 years, with 52.5% holding a bachelor’s degree or higher. 46% of respondents identified themselves as women, 53% as men and 1% either selected “other” or chose not to answer. Compared with the wider U.S. population, our survey slightly over-sampled Blacks relative to Whites and Hispanics, with 56% of respondents identifying as White or Caucasian, 20% as Black or African American, 11% as Hispanic, 7% as Asian or Asian American, 1% as American Indian or Alaska Native, and about 5% as another race. 44% of respondents were not employed and looking for work. Of those who were employed, 78% were working full-time and 22% part-time. 46% of employed participants had been in their current jobs more than two years, 15% between one year and two years, 17% less than one year, and 23% less than 6 months. 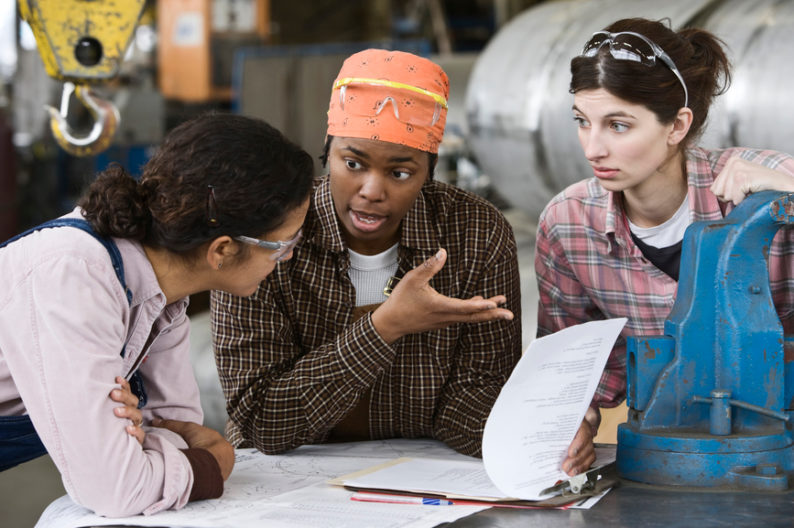 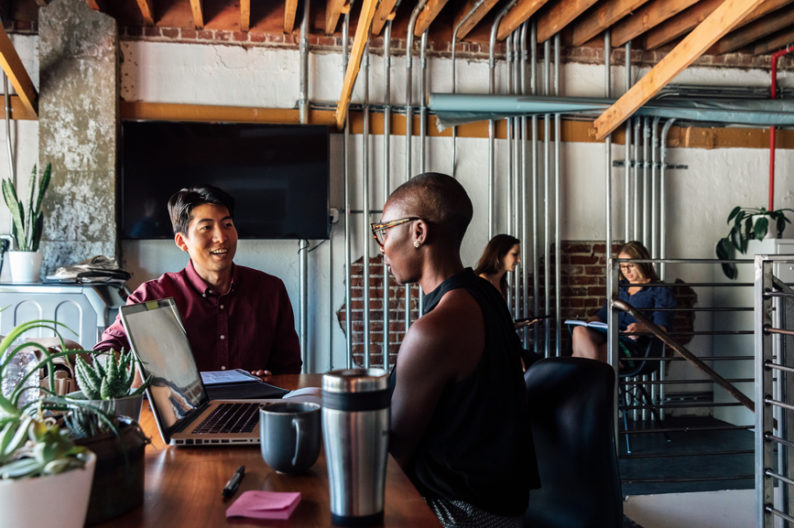 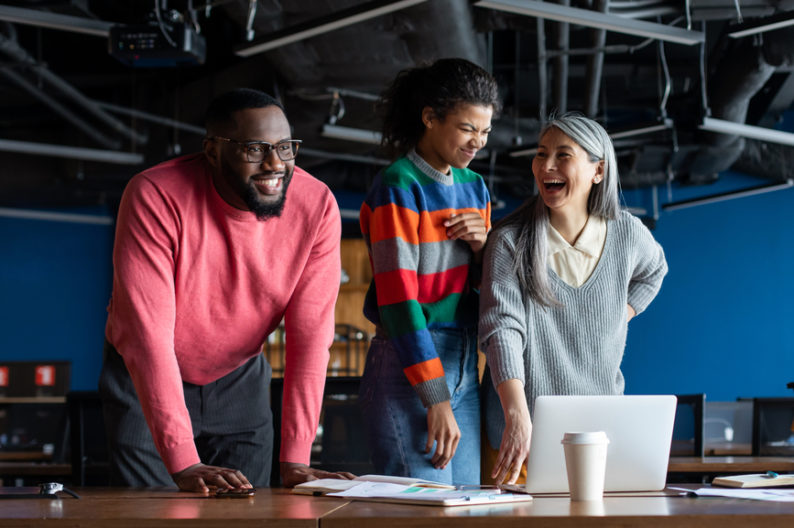 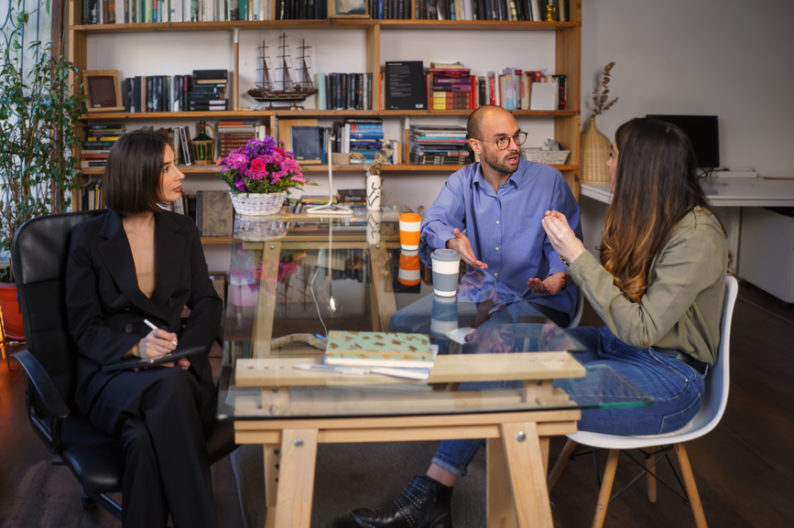 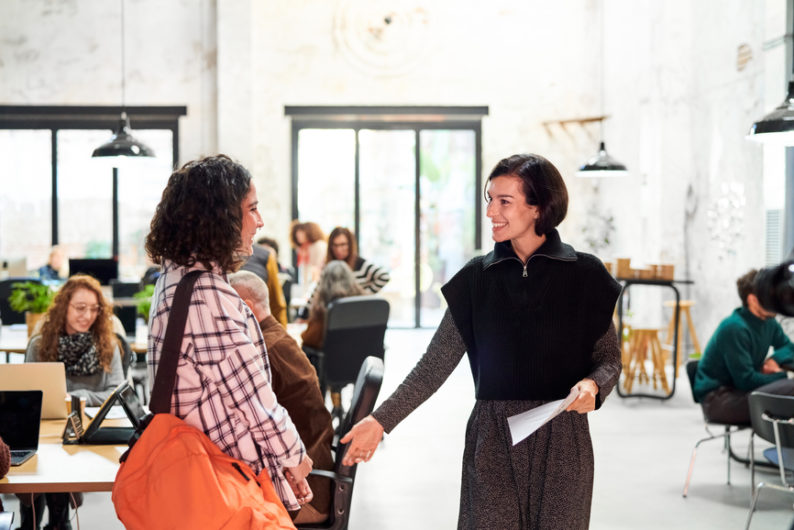 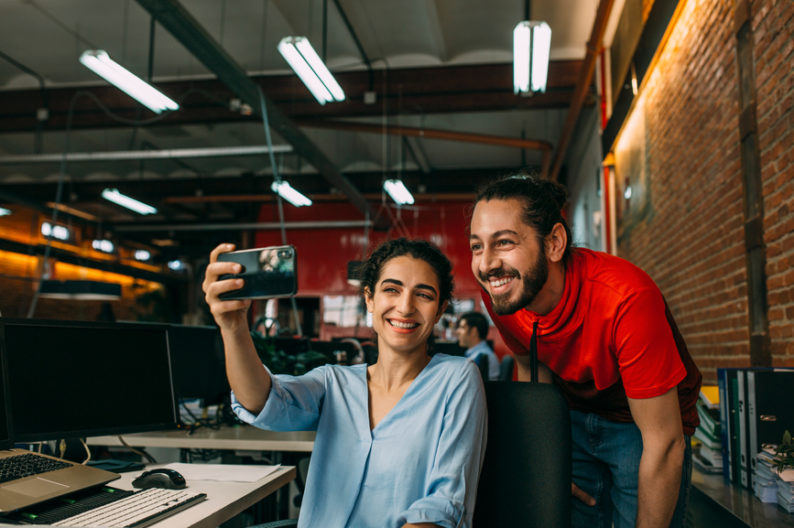