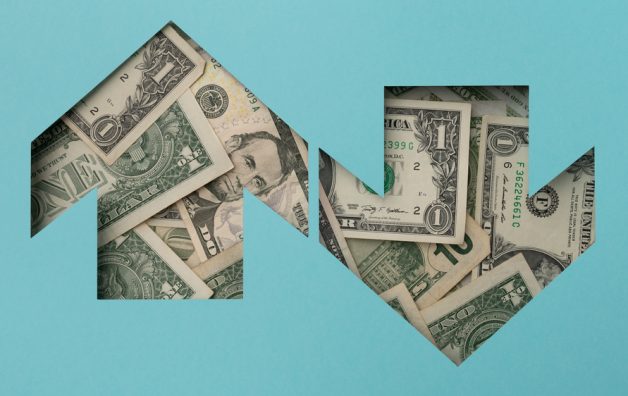 The 2020 coronavirus pandemic caused unprecedented disruption in the U.S. labor market. Below are five indicators that capture key aspects of the economic fallout. Stay informed with ZipRecruiter as we update these indicators in real time and track the post-COVID-19 economic recovery.

The latest data available suggest that the economy has improved considerably since the depths of the crisis in April, but the recovery still has a very long way to go.

There were 152.5 million workers on U.S. nonfarm payrolls in February, 2020. By April, 2020, payroll employment had fallen 14.5% to 130.3 million. The economy has since regained 56% of the losses, but the total number of payroll jobs is still 6.5% lower than its pre-crisis level. That means the jobs hole is still deeper now than at the depths of the Great Recession when payroll employment was down 6.3%. 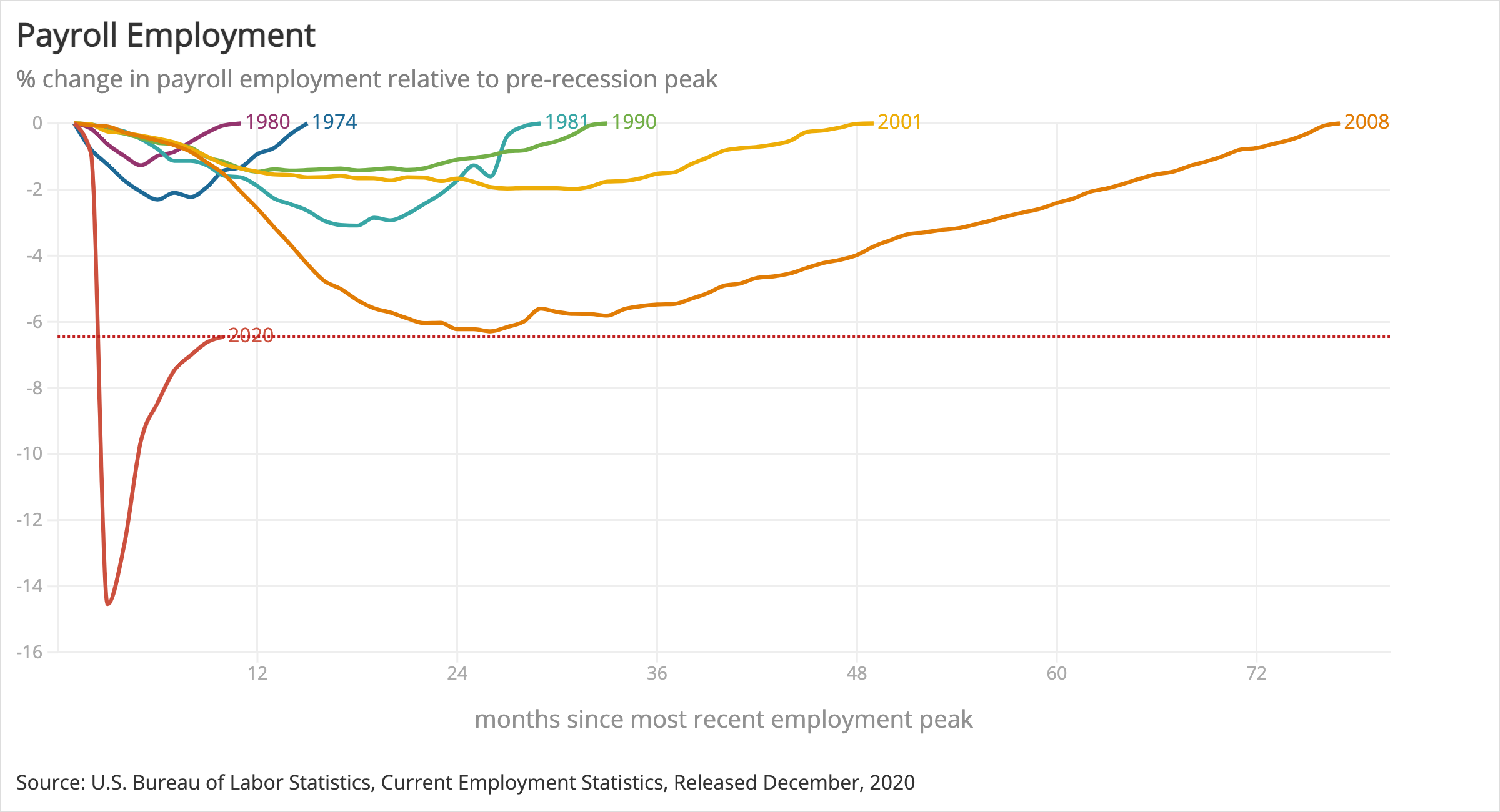 The unemployment rate skyrocketed to 14.7% in April from a low of 3.5% in February. It has recovered more rapidly than economists predicted it would, reaching 6.7% in November. But one important caveat is in order: the civilian labor force shrank by more than 8 million workers between February and April and is still smaller by 4 million workers than it was before the pandemic. So the unemployment rate fails to capture the full extent of the labor market disruption experienced as a result of Covid-19. 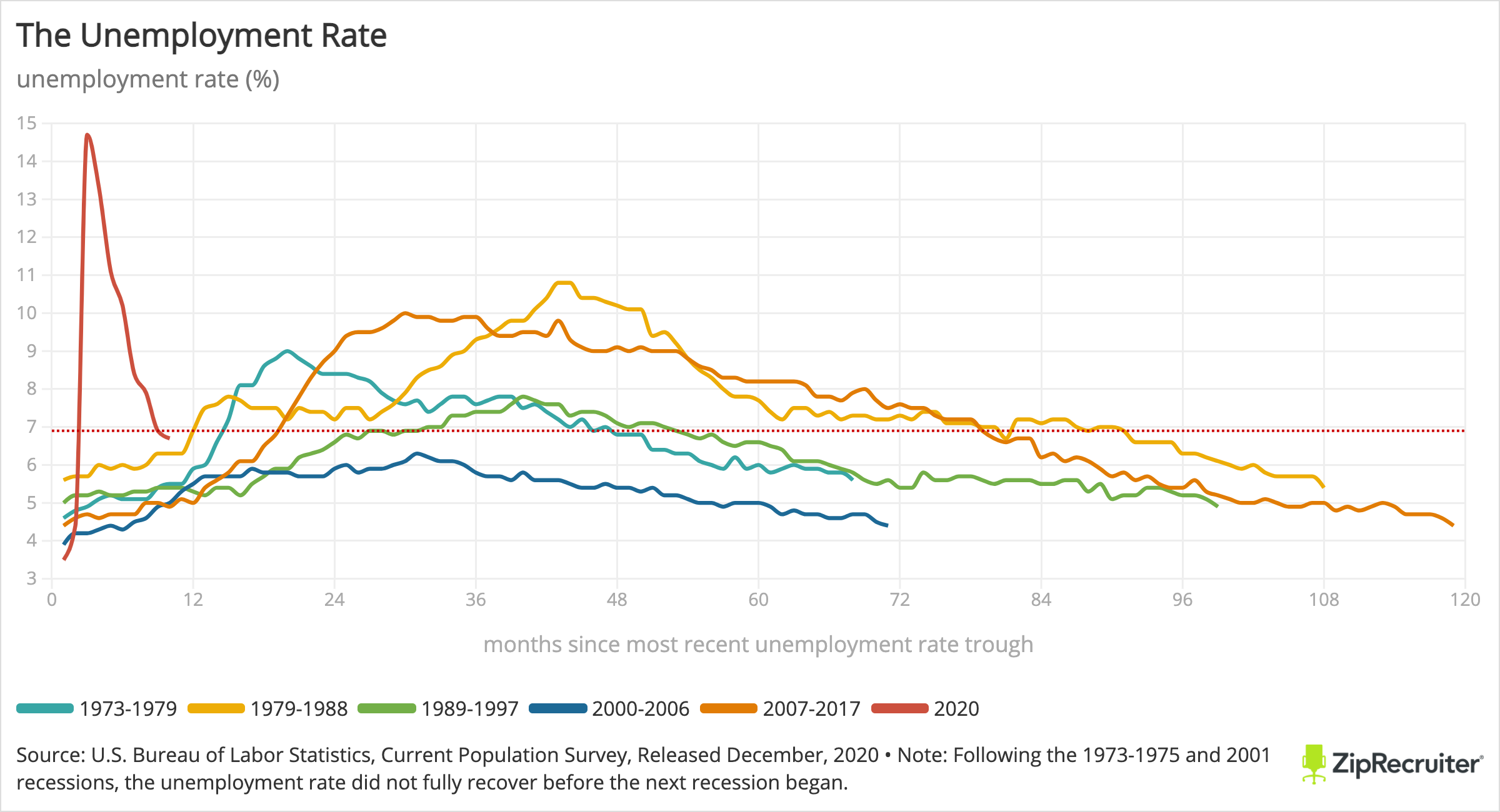 The U.S. Bureau of Labor Statistics defines job openings as all positions that are open on the last business day of the month. They must be specific positions—whether full-time or part-time, permanent or short-term—where the work could start within 30 days, and the employer is actively recruiting. Job openings are a good measure of employer demand and of the environment facing job seekers. The number of job openings fell in half over a two-year period due to the Great Recession, but the decline has been much smaller and shorter-lived in the Covid crisis. Job openings fell almost 29% between February and April, but they rapidly recovered and are now only down 5.0%. 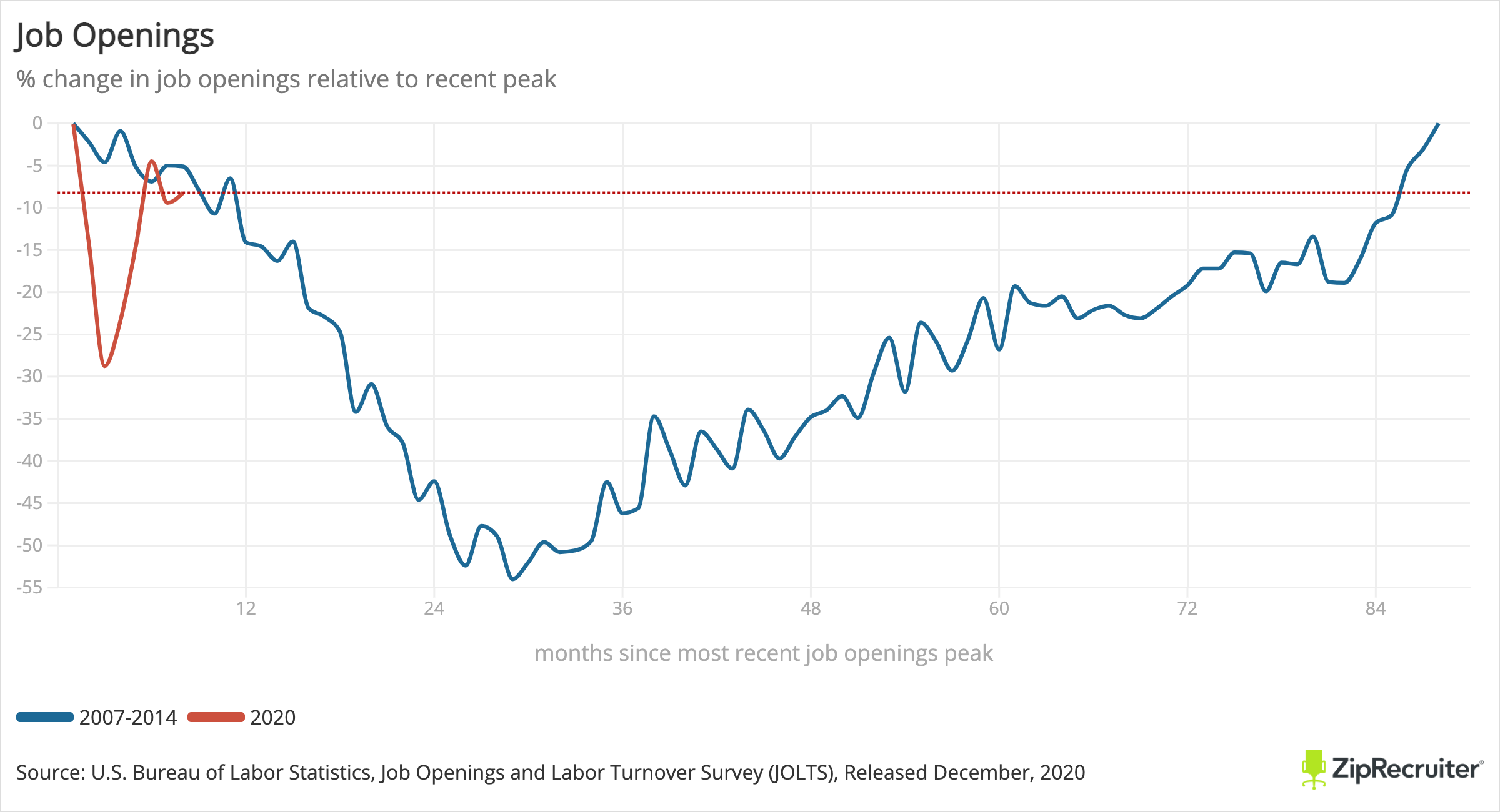 In past recessions, the number of Americans receiving unemployment benefits has expanded two- or three-fold. During the coronavirus pandemic, however, it saw a dramatic 15-fold increase from 1.7 million to 25 million. When one includes the Pandemic Unemployment Assistance program—federal unemployment benefits for independent contractors, self-employed workers, and gig workers—the total number of unemployment insurance recipients exceeded 30 million for a period. The numbers are rapidly declining as people return to work, but are still exceptionally high. 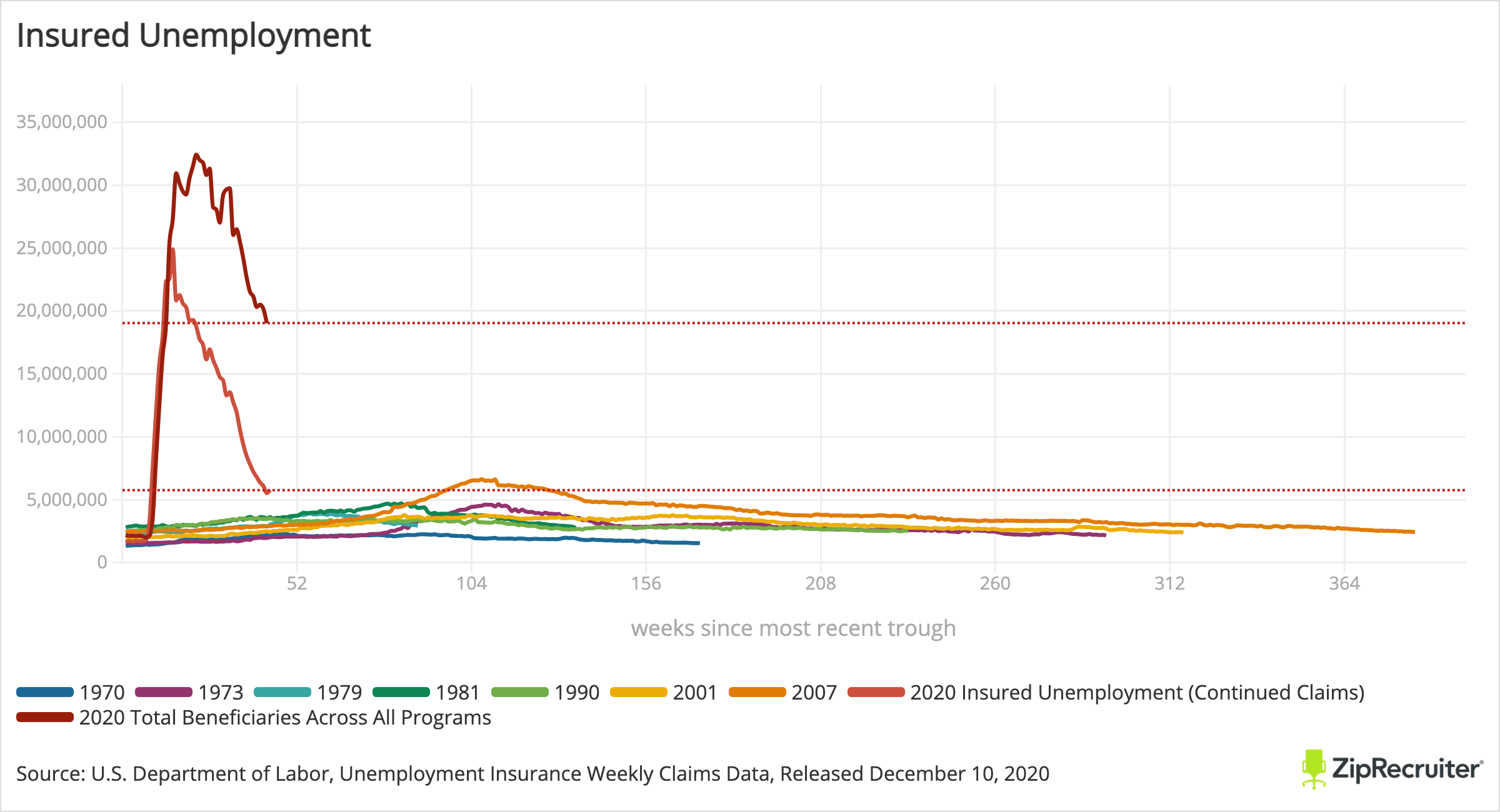 Consumer sentiment, as measured by the University of Michigan’s index, fell rapidly at the start of the COVID-19 outbreak in the U.S. as businesses and schools were forced to close to limit transmission of the virus, and government officials asked people to stay at home. Confidence improved in June as the economy reopened, but fell again in July as coronavirus cases surged and many reopenings were paused or reversed. It has since risen for four straight months. 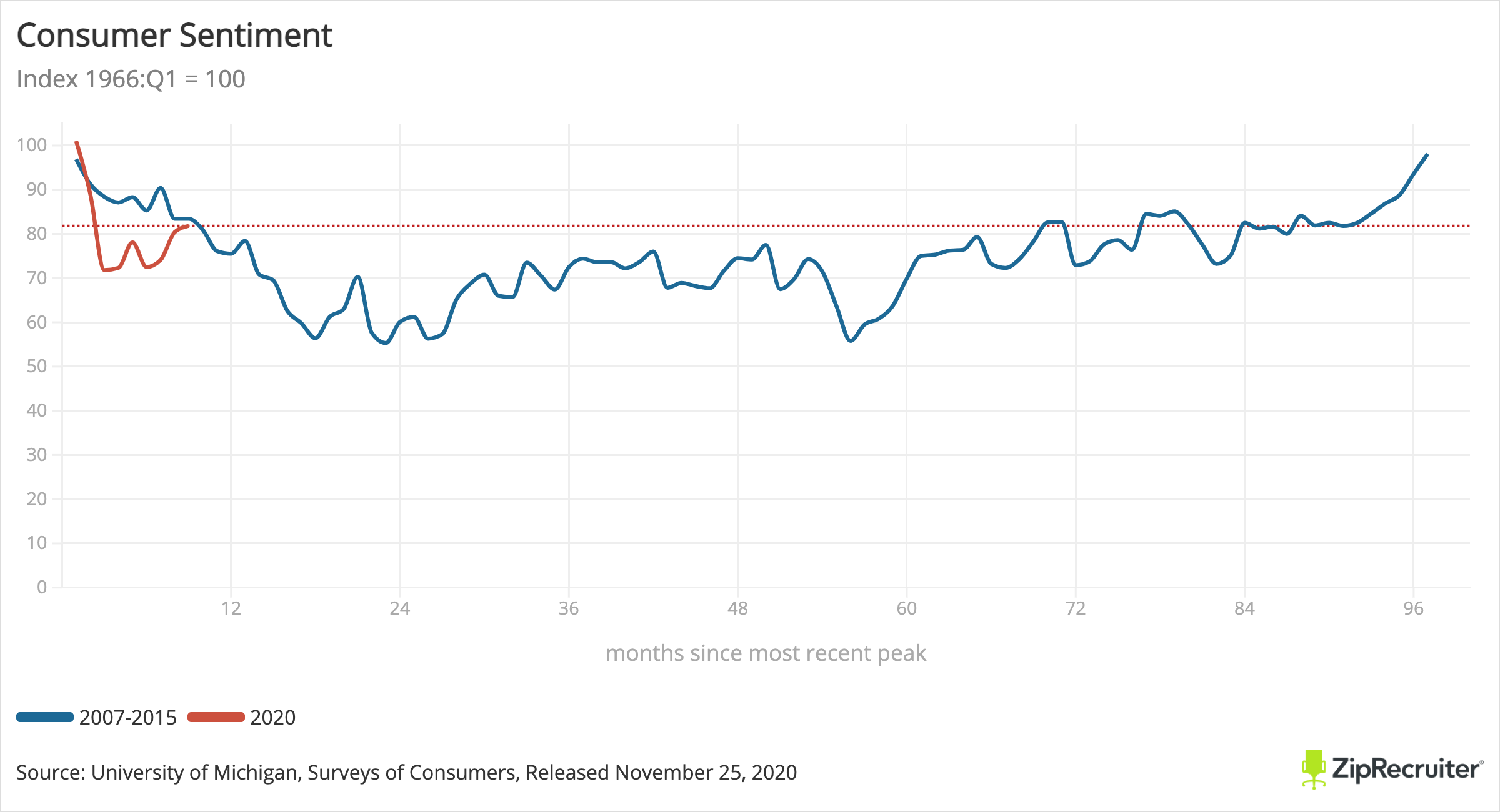 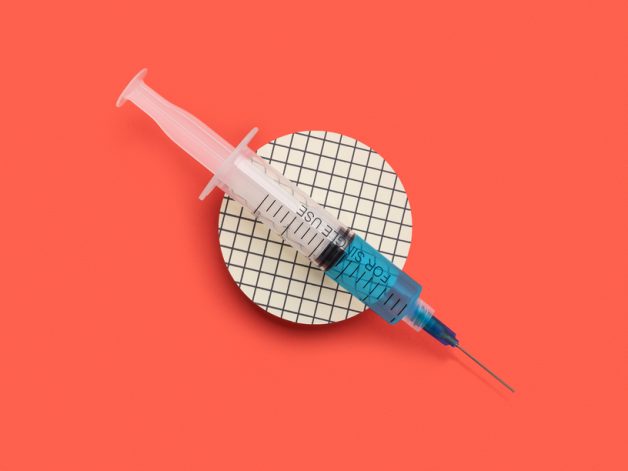 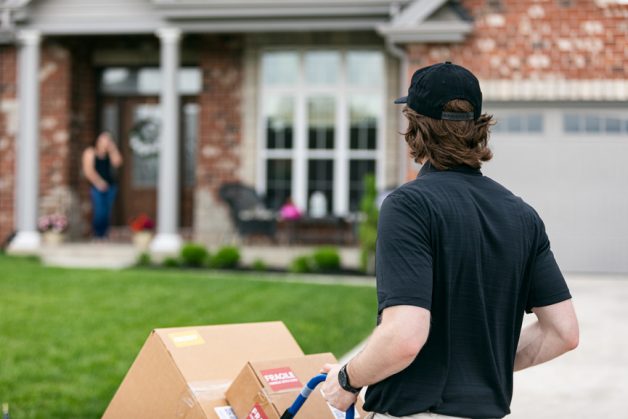 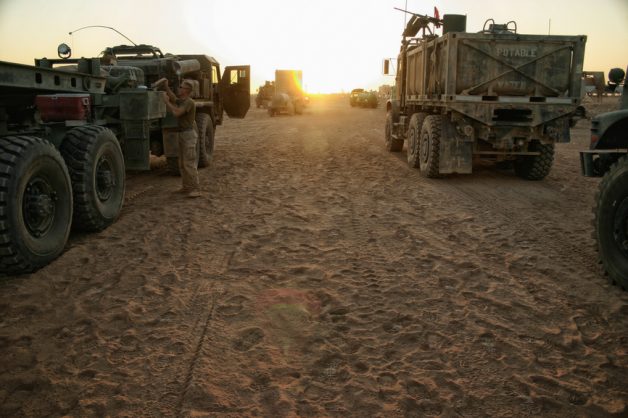 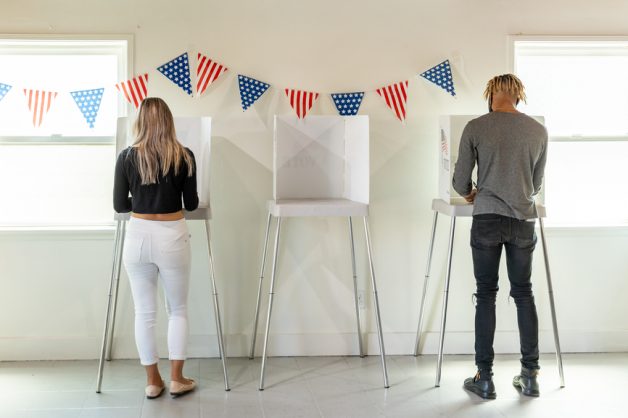 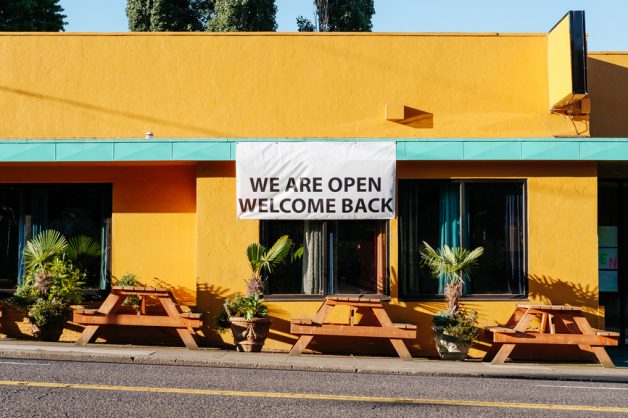